The History of Pickens Jails 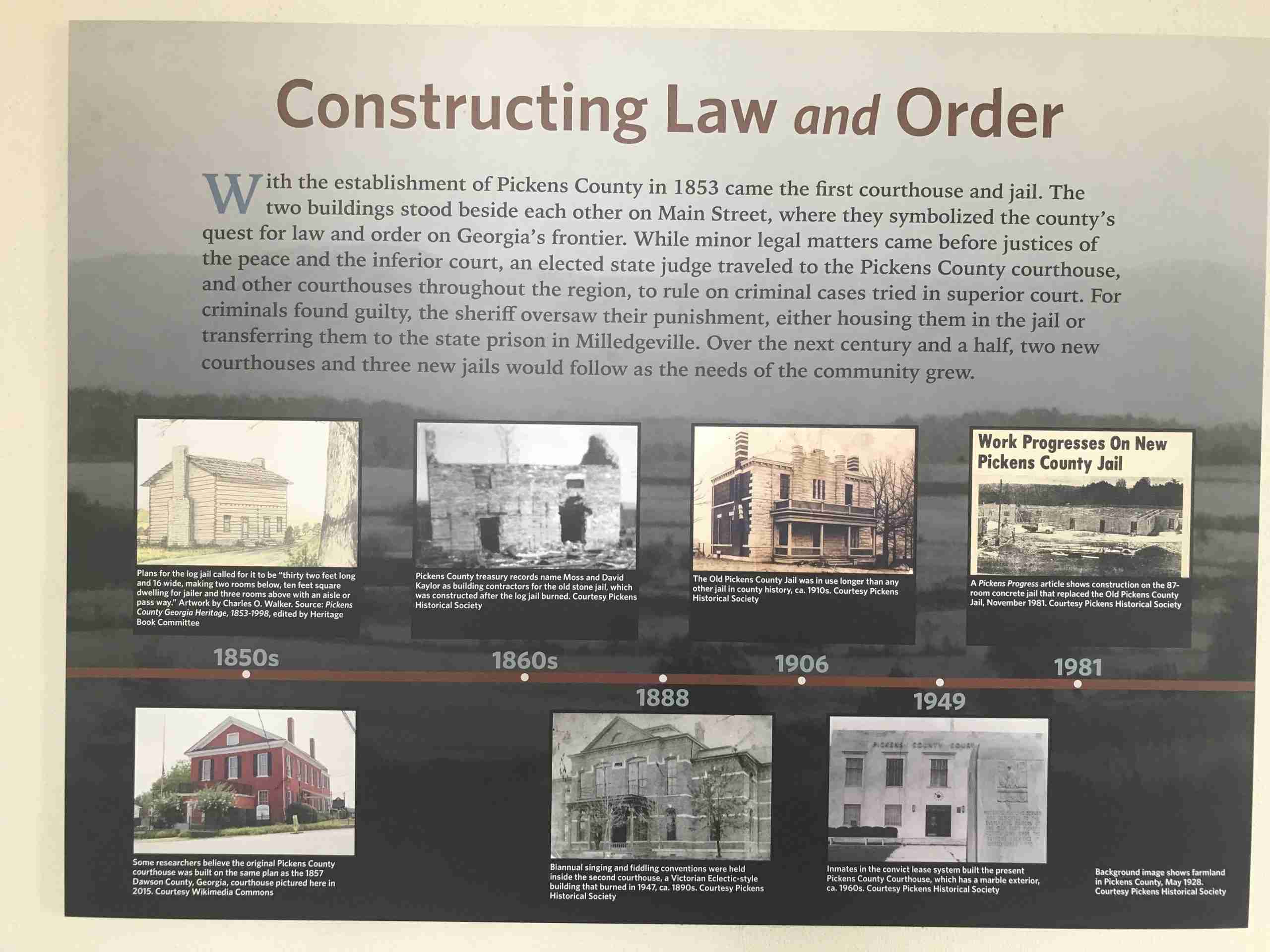 The first jail was crudely constructed about 1855 near the present-day Pickens County Court House. William Sosebee was the first Sheriff, serving two terms 1854 – 1856 and 1858 – 1859. He died in office. (William Sosebee also donated the property for Jasper First Baptist Church). The plan for the first jail has survived with the following description: “Jail to be thirty-two feet long and sixteen feet wide, making two rooms below, ten feet square dwelling for jailer and three rooms above with an aisle or pass way….” Near the end of the War Between the States, this jail was destroyed by unknown means. Documentation for the demise of the first jail is found in the treasurer’s records of Pickens County when two men, Moss and (David) Kaylor, were paid in 1866 to construct a second jail for the county. Work took more than a year to make the structure secure with locks installed. Prisoners were once again housed in adjoining counties.

In the fall of 1891, a special grand jury was convened to investigate the need for a new jail. The Piedmont Republican in a lengthy article Sept 19, 1891, enumerated the necessity of a new jail. The second jail, constructed in 1866-1867, was described as “badly built twenty-five years ago with the walls and sills resting on the ground – never dry – the walls, sills and wooden parts are thoroughly saturated with typhoid malaria – being badly lighted and worse ventilated. It is no wonder that its occupants are nearly always sick, and that death continually stares them in the face.” The article went on to state that “Sheriff John F. Lindsey died in the jail of malaria fever. His appointed successor (Rufus S. Henderson) lived there, had some sickness but no deaths. But the Sheriff next elected (John E. Johnson) died there in the winter just before his term expired. Sheriff James H. Pinyan was elected Sheriff, and a few months after moving into the building, was stricken down and for a time was critically low.”

Ironically, it would be 15 more years before the third Pickens County Jail was constructed. In the meantime, a total of nine Pickens County Sheriffs and their families had to live in the unhealthy building. Only occasional newspapers exist for the next 15 years prior to the establishment of the building committee for the third Jail. Members of the 1906 Building Committee were J. C. Payne, Ordinary, B. H. Simmons, A. McHan, A. B. Bradley, J. R. Allen, and Dr. W. B. Tate. Sheriff was Dock Franklin Taylor. The architect was J. W. Golucke & Co. of Atlanta, who designed many of the historic county court houses in Georgia. Contractors were Pauley Jail Building Co. and W. L. Landrum & Son. Two local artisans who helped build the old jail were Lee Prather of Marble Hill, who did all of the ornamental rock work, and Luther Cartwright, formerly of KY, who came with Pauley Jail Co. and remained in Pickens County. He became head of construction for The Georgia Marble Company, overseeing the building many of the houses and structures in the Historic Village of Tate.

After the second jail was evacuated in 1906, the building became part of the Nunnally – McRae Manufacturing Company (a pants factory). The Pickens County Progress reported in the July 4 1963 issue that a fire July 4 1963 destroyed the Nunnally – McRae building. “The only thing remaining on the site is the first (actually second) jail in the county, made of stone. To this original building an addition was made for a marble finishing company approximately forty years ago.” The jail building was said to have served as the snack bar for the Nunnally – McRae employees. It was demolished a short time after the fire. One photo exists of the building following the 1963 fire Thirteen Sheriffs lived in the 1906 jail. The final two were Sheriff Harley Cantrell and his family and Deputy Billy P. Wofford, now Pickens County Sheriff, who lived in the jail 1971 – 1972. The Old Jail was used from 1906 – 1982, usually housing more prisoners than the sixteen-bed cellblock should accommodate. One court week there were thirty prisoners in the jail. During the final ten years of use deputies were rotated into the living quarters. Two prisoners were moved from the jail to the fourth jail in 1982. The fourth jail was used from 1982 – 2006. The cornerstone of the fourth jail has been placed on the grounds of the Old Jail, close to the 1906 cornerstone.

The Marble Valley Historical Society, Inc. assumed responsibility for the Old Jail when it was evacuated in 1982. They raised money for rehabilitation and restoration of the facility. In recent years a Pickens County Museum and a Law Enforcement Exhibit have been added to the displays. Among the most recent additions to the display is the 1906 construction plan and contract. The building was placed in the National Register of Historic Buildings in 1982. The marble on the front of the jail was taken from the Delaware Quarry in Georgia, which opened about 1840 by Henry Fitzsimmons. The work was done by Lee W. Prather, a local stone worker. (The Historical Marker information at the end of the entry reads: “112-6 Georgia Historic Marker 1986.”).